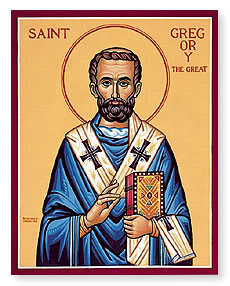 A Doctor of the Church, Gregory was the first Pope to come from a Monastic background. Pope Gregory was known as "the Great" becasue of his charity in feeding starving Romans, his protection of the Jewish people of Rome, and his great political diplomacy.

There was an Anglo-Saxon boys’ choir in Rome. Pope Gregory was told that they were Angles (from England). Because of their ruddy complexion, he said they were not Angles, but Angels. Pope Gregory then sent the missionary St. Augustine to the Royal Court in Canterbury to reawaken the remnant of the Catholic faith that was still in England.

Canonized by popular acclaim immediately after his death, Gregory is the patron saint of musicians, singers, students and teachers. To learn more about St. Gregory the Great, see: https://infogalactic.com/info/Pope_Gregory_I